Things to do in Berwick-upon-Tweed

Berwick-upon-Tweed is a charming town in Northumberland. Nestled on the coast, you’ll find sandy beaches and relaxing riverside walks here – the ideal holiday spot for walking and cycling adventures. From canoeing along the river to exploring the countryside on a wildlife tour, there’s plenty here to keep the kids occupied too. Read on to discover the best things to do in Berwick-upon-Tweed.

This is actually a great question as, technically speaking, this twee little town has hopped the border between England and Scotland a staggering 13 times. Nowadays, Berwick-upon-Tweed is officially the northernmost town in England and is located on the tip of Northumberland, just 2.5 miles from the Scottish border.

Things to do in Berwick-upon-Tweed

Canoe along the River Tweed

Why not head out for a canoeing trip along the lovely River Tweed? It is Scotland’s longest river and as it enters England, you’ll find some stunning sections ideal for exploring in a canoe. The perfect adventure for all the family.

Where in Northumberland can you stand on one spot and see three castles? Only on the Royal Tweed Bridge in Berwick-upon-Tweed! From Golden Square in Berwick town centre, walk over the Royal Tweed Bridge, sticking to the left-hand side.  From the bridge, you’ll be rewarded with a breathtaking view which includes Berwick Castle, Holy Island Castle and Bamburgh Castle!

If the weather turns grey and gloomy during your stay (hey, it is England after all), then spend an afternoon exploring the Berwick Museum and Art Gallery. Although the kids may turn their noses up at the mention of the word museum, this is actually a great day out for kids of all ages.  With plenty of interactive displays and even a giant dragon you can walk through. Plus, you’ll get to learn a little more about the history of the area you’re holidaying in.

The historic Paxton House lies just a few miles away from Berwick-upon-Tweed and is another great option should the weather turn foul during your trip. Built in the 18th century, this exquisite country house is actually a great spot for the kids too. Completely family-friendly, they host an array of exciting events and activities throughout the year.

Should the sun decide to make an appearance again, the country house is surrounded by 80 acres of grounds and woodlands which the kids will just love exploring. What’s more, there’s an adventure play park on the site, complete with a zip wire and den building area. What more could you ask for?

Designed by Nicholas Hawksmoor in the early 18th century, this former army abode now showcases military history through a variety of artefacts and exhibitions. Now an English Heritage Site, Berwick Barracks is a great spot for a family day out, especially if any of the kids are going through their ‘obsessed with toy guns’ phase.

Inside the barracks, you’ll also find the Scottish Borderers Regimental Museum. Even better, the admission fee to the barracks covers entry to both sites, as well as  Berwick Museum and Art Gallery – utter bargain! 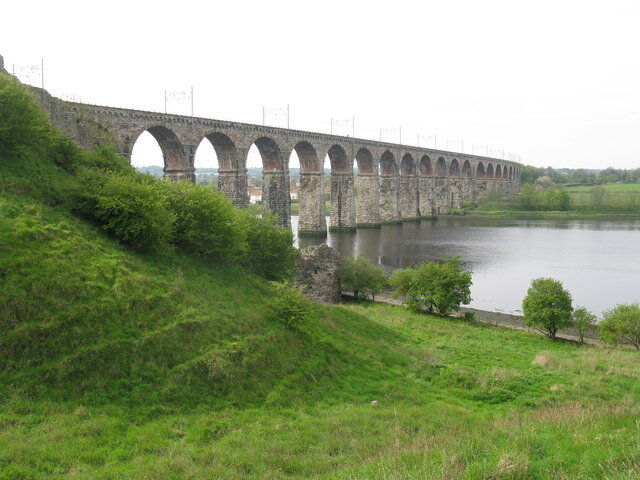 This Grade I listed railway viaduct was built in the mid-19th century and opened by none other than Queen Victoria herself. Connecting Berwick-upon-Tweed with Tweedmouth, this stunning example of Victorian architecture set against the river and countryside makes for a beautiful picture. Head up onto the bridge in time for the sunset and you’ll get some more great shots from there.

On a sunny afternoon, spend some time wandering the Elizabethan walls which encircle the town. The town’s most celebrated piece of architecture, these structures are the only example of bastioned town walls in the whole of the UK and are famous for being one of the best-preserved specimens across the continent of Europe. Once upon the walls, you’ll be rewarded with superb views over the town and surrounding countryside.

Furthermore, you can combine a walk around the town’s ramparts with a visit to the ruins of Berwick Castle. This medieval castle was once crucial in the border wars between England and Scotland. Listen hard enough and you’ll hear the crashes and cries from battles long gone by.

This live arts, cinema and theatre venue is a popular spot with the locals, and for good reason too! England’s most northerly theatre, The Maltings opened its doors in 1990 and has been entertaining Berwick-upon-Tweed ever since. With over 500 live events a year, there’s sure to be something on during your visit. A great option if you’re fancying an evening out in town.

If you do like to be beside the seaside, then make sure you pay Cocklawburn Beach a visit during your stay in Berwick-upon-Tweed. Just a 12-minute drive from the town, this gorgeous golden sand beach is the ideal spot for family fun, romantic strolls and adventures with the pooch.

Head out on a walk along the harbour to see Berwick’s picturesque lighthouse. Located at the end of the town’s pier, the lighthouse offers stunning views over the Northumberland coast. It’s also a great place to do some bird watching and, if you’re really lucky, you may catch a glimpse of seals or dolphins in the water.