Harry Potter holidays in the UK

J.K.Rowling’s enchanting world of magic, muggles and Hogwarts has been mesmerising the world for over 20 years. Luckily for us Brits, plenty of the locations in the wizarding world are said to have been inspired by the UK. What’s more, the film series also made use of some of Britain’s most spellbinding spots to boot. Big Harry Potter fan? Read on to discover some of the most magical film locations to visit on your next getaway. 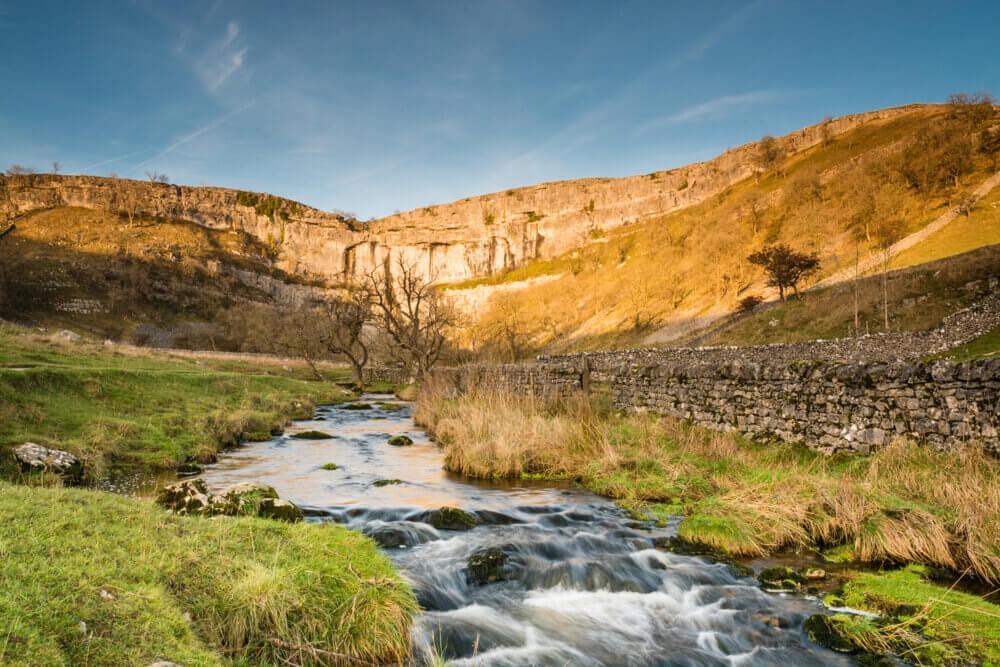 Malham Cove is the limestone formation in the little town of Malham in the Yorkshire Dales. The curvature of this limestone cliff was created at the end of the last Ice Age by a glacier-water waterfalls, while the deep formations that etch into its surface are to be blamed on acidic rain. Malham Cove featured in the first Deathly Hallows movie, where Harry and Hermione set up camp on their journey for Horcruxes!

Derbyshire isn’t short of magical country estates, but Hardwick Hall just about beats ’em all. A National Trust protected property, this Elizabethan masterpiece is now a great place to spend a day. Whether you’re there to enjoy a brisk, seasonal walk or visiting for the popular outdoor cinema. And speaking of films, Hardwick Hall doubled up as the sinister Malfoy Manor in The Deathly Hallows movies, chosen because of its mysterious beauty and allure!

One of the most easily accessible Harry Potter spots around, Platform 9 3⁄4’s in bustling Kings Cross station attracts Harry Potter fans from all over the world. Set in central London, a trip to the platform can easily be added onto a weekend break in the city. What’s more, the kids (and grown-ups too) will just love getting a snap of themselves pushing the trolley through the wall, just like Harry did on his first day at Hogwarts. This is where the magic really began, folks.

We all remember the scene: Ron and Harry in the flying blue car, the Hogwarts Express gliding over the viaduct below, steam bellowing and frothing into the green mountain-scape beyond. Turns out, it’s 100% real (the flying car may have had green screen help!). On the West Highland Line, the Glenfinnan Viaduct is crossed by the Jacobite steam train which runs between the beautiful Fort William – the largest town in the Scottish Highlands – and magical Mallaig, a bustling fishing port. 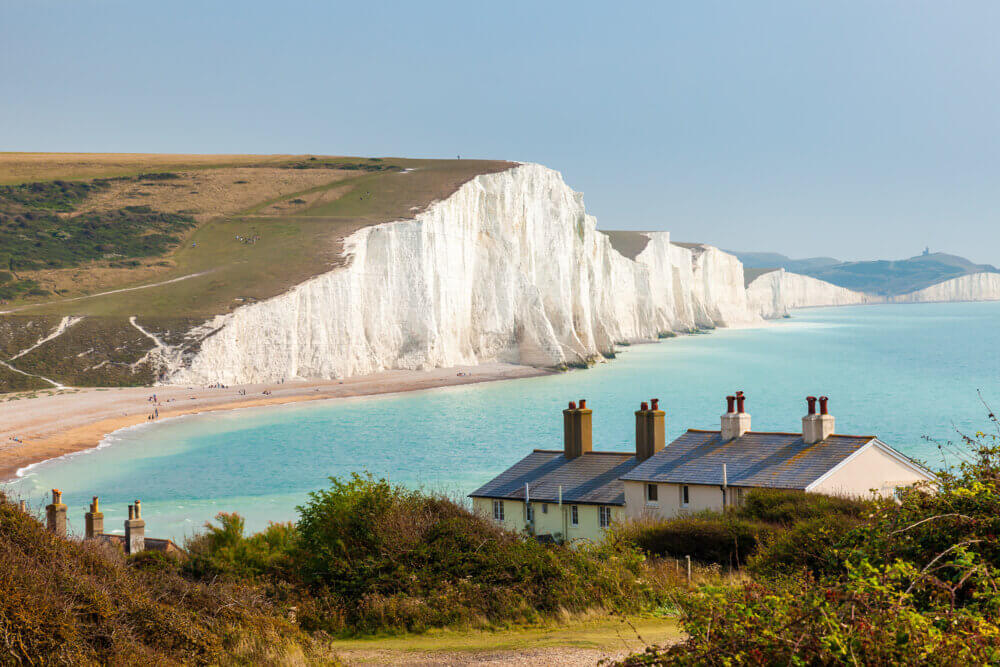 A regular on the silver-screen, these spectacular white cliffs are positioned right on the edge of our great island in East Sussex. The Seven Sisters coastline is made up of 280 hectares of chalk cliffs and has visitors flocking to its sheer edges and unmistakable grandeur year after year. It features as a beautiful backdrop in The Goblet of Fire, the place Harry and co end up after using a portkey to escape the Quidditch World Cup. 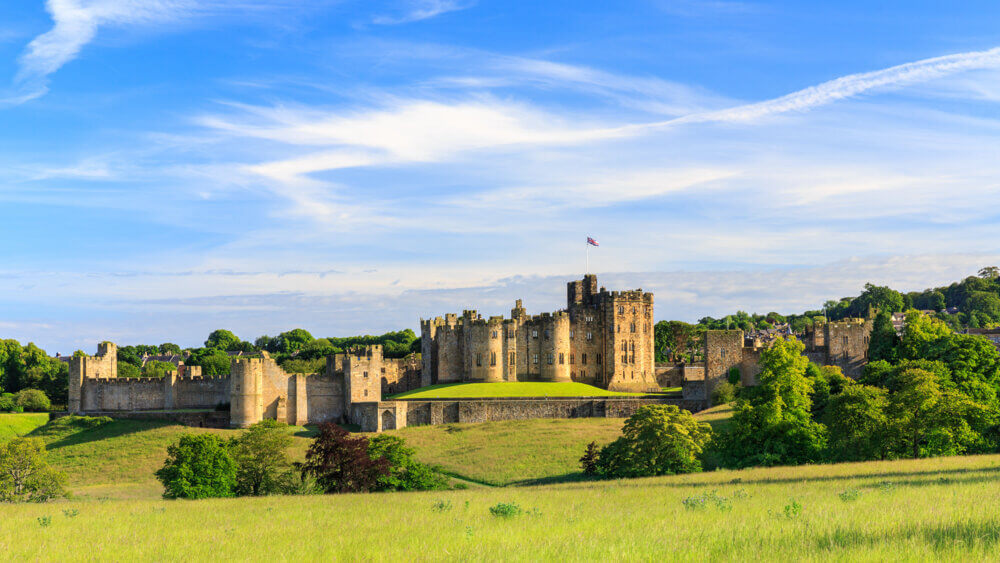 And now to the real deal – Hogwarts castle itself. Northumberland’s Alnwick Castle was used heavily in the first two Harry Potter films as the set for J.K. Rowling’s magical school for young witches and wizards. The grounds of the Outer Bailey are where Madame Hooch taught Harry and the gang to fly, which is exactly what you can do on your visit! Broomstick training is free at Alnwick Castle, and a perfect way to enjoy this spell-binding location in true Harry Potter style.

Set on the Strand in the heart of London, the interior of the magnificent Australia House was used as the setting for Gringotts Wizarding Bank in the Harry Potter films. Although sadly muggles aren’t allowed to enter and wander around the building, you can always walk past and peer through the majestic doors. Perhaps you’ll catch a glimpse of the goblins counting their towering stacks of galleons.

If you’re a dedicated Harry Potter fan, then you really need to pay the Warner Bros Studio in Hertfordshire a visit. The Harry Potter Studio tour showcases all the film-making magic of the movies and features the incredible sets, special effects and intricate costumes which were used throughout the series. Hop aboard the Weasley’s flying car, marvel at the grandeur of the Great Hall, wander through the cosy Gryffindor common room and come face-to-face with some of your favourite characters on this walking tour.

Set in the heart of Buckinghamshire, this 618-acre country park was used as a filming location for the Forbidden Forest in Harry Potter and the Philosopher’s Stone. In addition to this claim to fame, Black Park is also a very picturesque spot and has miles upon miles of woodland tracks and trails to explore. It’s perfect for a fun family day out. Just watch out for the giant spiders! 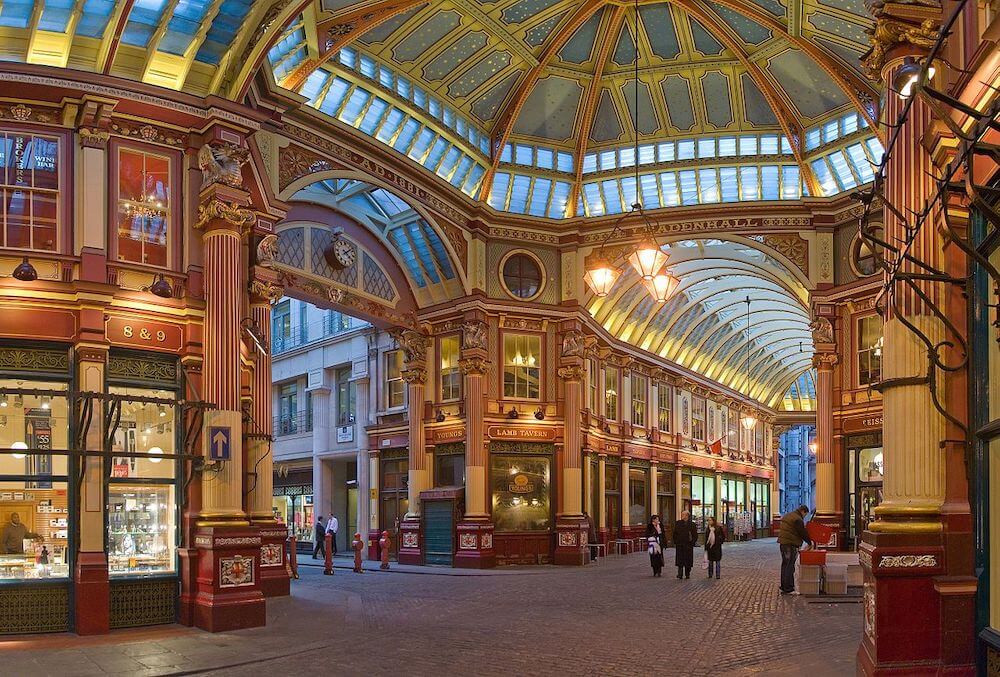 Although both the sets for the Leaky Cauldron and Diagon Alley can be found at the Warner Bros Studio, in the first film Harry and Hagrid passed through Leadenhall Market in London on their way to them. Leadenhall Market is a beautifully-preserved example of Victorian architecture and it’s not hard to see why the film-makers considered it a magical enough setting for the movies.

Although the Great Hall can also be found in the Warner Bros Studio, the design was said to have been inspired by the famous Great Hall at Christ Church college in Oxford. Around 500 years old, this hall has certainly hosted its fair share of splendid banquets over the years and is definitely worth a visit if you’re a fan of Harry Potter or just history in general. Plus the city of Oxford is an absolutely stunning spot to base yourself for the weekend.

Built in 1865, Goathland Train Station in North Yorkshire was used as the station for both Hogwarts and the village of Hogsmeade in the Harry Potter films. The station is still very much in operation to this day and can be reached by hopping onto a train at the towns of Whitby or Pickering. Not only will you see a real-life scene from the movie but you’ll also get to explore a little bit of ‘God’s Own County’ too – a win-win situation if you ask us!

The Most Weird & Wonderful Events Across the UK