While Devon is revered for its sweeping coastlines and idyllic beaches, its rich history also makes it a haven for keen historians and culture seekers. Dotted around this picturesque county are various chapels, abbeys, castles and museums – each offering a different aspect into the history of how it was inhabited. If you’re planning a journey over to the South West, make sure to visit these intriguing attractions. You’ll still have plenty of time to enjoy the beaches and coasts while you’re there.

Today, the chapel is regarded as an iconic landmark overlooking the harbour where the occasional services are held. St Nicholas Chapel has stunning 360-degree views of the surrounding countryside and coastline and is steeped in fascinating history.

Best for: Relaxing strolls and tasty picnics along the garden grounds.

Torre Abbey, established in 1196, is a museum of history and art housed in an Ancient Scheduled Monument on the beautiful South Devon coast, in Torquay.  It is now considered the best-preserved medieval monastery in Devon and Cornwall.

Torre Abbey is renowned for its art collection, regular exhibitions and tranquil walled gardens containing a multitude of exotic plants.  This natural haven is beautiful and perfect for walking or picnicking. While you’re there, visit the Torre Abbey Tearooms for a coffee and a freshly-baked cake.

Find out more about Torre Abbey >

Best for: Exploring the beautiful gardens of the estate.

Built in the 14th-century by Sir Philip Courtenay, Powderham Castle in Exeter is home to the Earl and Countess of Devon and their children. Bearing the Courtenay name, of French origin, the family has over one thousand years of traceable history, primarily situated in Devon.

Powderham comes from the Dutch word Polder, meaning ‘the hamlet of the reclaimed marshland’. The original building was the manor house and the ‘castle’ would have been added around the 17th-century.  The castle and gardens can be visited throughout the year and the castle hosts various events from music to food festivals.

Find out more about Powderham Castle >

Best for: Discovering archaeological finds from across the world.

The award-winning Royal Albert Memorial Museum holds a diverse collection of over one million objects including examples of zoology, fine art, local and overseas archaeology.

Founded in 1868, the museum is housed in a Gothic Revival building that has undergone several extensions during its history. The museum was re-opened in December 2011 after a redevelopment lasting four years. Since its re-opening, the museum has received several awards including “Museum of the Year” by The Art Fund charity in 2012.

Find out more about the Royal Albert Memorial Museum >

Best for: Learning more about the military history of Devon.

Be inspired by Dartmouth’s amazing history by visiting Dartmouth Castle in the most scenic position on the water’s edge of the River Dart. Arrive in style along the river or you can walk from the town and take in the wonderful views. The castle has acted as a fortress for over 600 years, guarding the entrance to the narrow Estuary.

An array of heavy artillery is on display, giving the visitor an impression of how the castle operated. You can climb up the gun-tower for incredible views over the river and after your visit, there are plenty of options for lunch in nearby Dartmouth.

Find out more about Dartmouth Castle >

Best for: Experiencing the life of a 16th-century sailor in a swashbuckling galleon.

Originally built in 1963 for BBC filming purposes, The Golden Hind Museum Ship is now a permanently anchored feature of Brixham Harbour. The Golden Hind is a replica of the original ship that belonged to the famous navigator Sir Francis Drake. The ship remains an accurate representation of life on board a traditional ship in the age of exploration.

Sir Francis Drake is best remembered as an explorer. In his most famous ship, the Golden Hind, Drake became the first Englishman to navigate the globe in an epic expedition of plunder and discovery over 435 years ago covering over 360,000 miles.

Find out more about The Golden Hind >

Best for: Exploring one of the most impressive cathedrals in England. 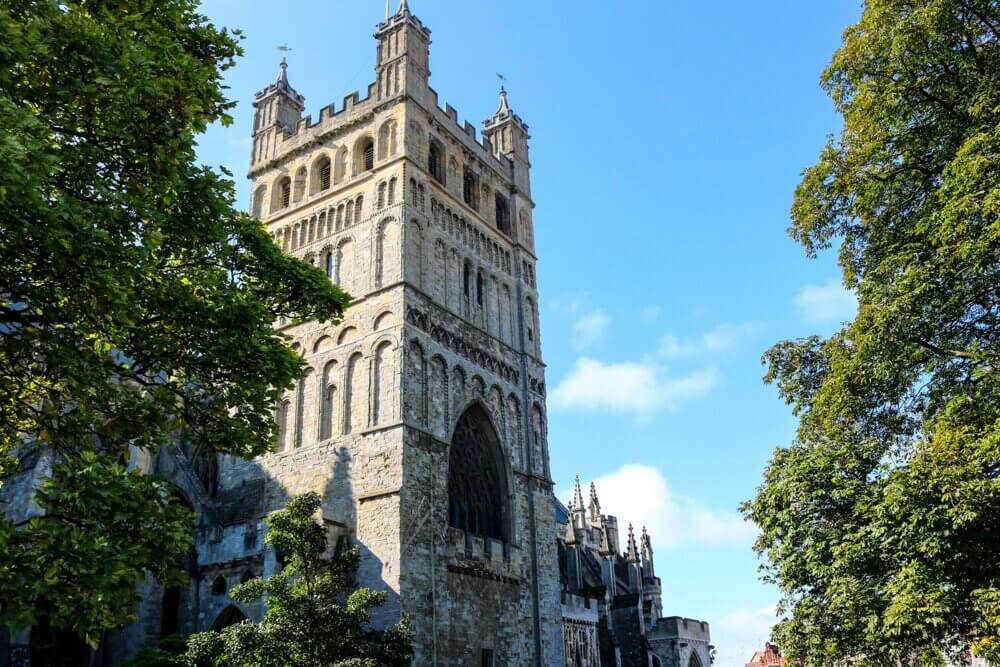 Exeter Cathedral is an Anglican cathedral and the seat of the Bishop of Exeter. Built between 1112 to 1400, the Cathedral is a stunning example of Gothic architecture and an immense amount of skill and craftsmanship is evident. It has the longest gothic vaulted ceiling in the world, two Norman towers and impressive front carvings.

It is home to some fascinating artefacts; including the Exeter Cathedral Astronomical Clock and a library containing the Exeter Book of Anglo-Saxon Poetry. The cathedral remains today an active parish for its surrounding community.

Find out more about Exeter Cathedral >

Hi, I'm Hannah, an avid traveller who loves nothing more than discovering hidden and tranquil beauty spots across the world, and especially in the UK. At home in North Wales, you'll find me making the most of all the great woodland and coastal walks - always finished off with a visit to a nearby eatery for some tasty food and drink!