The 10 Best Castles in Wales

If you’re looking for a castle-filled getaway, then a trip to Wales should definitely be on the cards. Shrouded in history, myth and legend, Wales is often referred to as ‘Land of Castles’ (as well as the ‘Land of Dragons’ and the ‘Land of Songs’), and for good reason – it’s home to some of Europe’s finest fortresses. The country boasts an array of fantastically-preserved strongholds, originating from across the different eras of history. From ancient Roman forts and Medieval banqueting halls to Tudor Palaces and dazzling Victorian masterpieces, when it comes to castles, Wales really does have it all.

If you see anywhere you like, why not make a trip of it, and book one of our incredible holiday cottages nearby. If you’re dreaming of a UK getaway but have left everything a little late, worry not, just check out our selection of last-minute cottages. 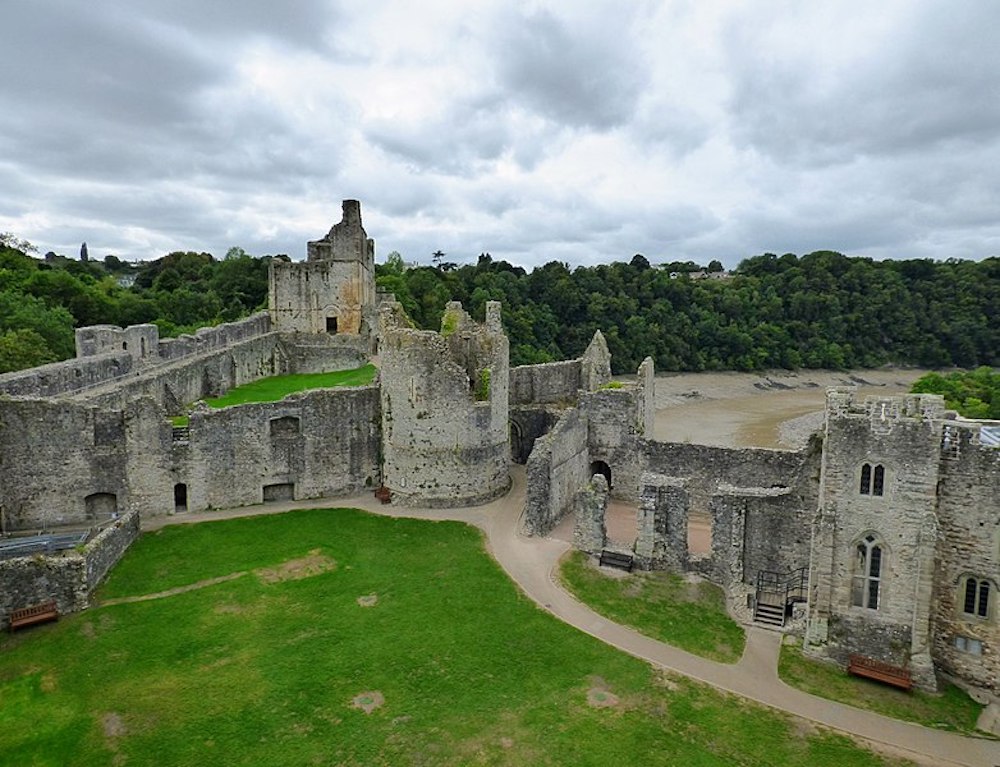 The wonderfully-preserved Chepstow Castle stands proudly atop a limestone cliff, looking out over the River Wye like a silent sentinel. The building of the castle was begun in 1067, by one Earl William FitzOsbern, who was pals with William the Conqueror, making Chepstow Castle one of the first Norman strongholds in Wales.

The castle doors at Chepstow also deserve particular mention: originally thought to be from the 13th century, it now transpires that they were constructed before the 1190s, meaning that they are the oldest castle doors in the whole of Europe – not bad for a little town in Monmouthshire. Don’t be fooled by the great replicas which now stand at the main gate though – if you want to see the real thing you’ll have to venture further inside, as they were moved into the castle to protect them from the elements.

Best for: Blending into nature 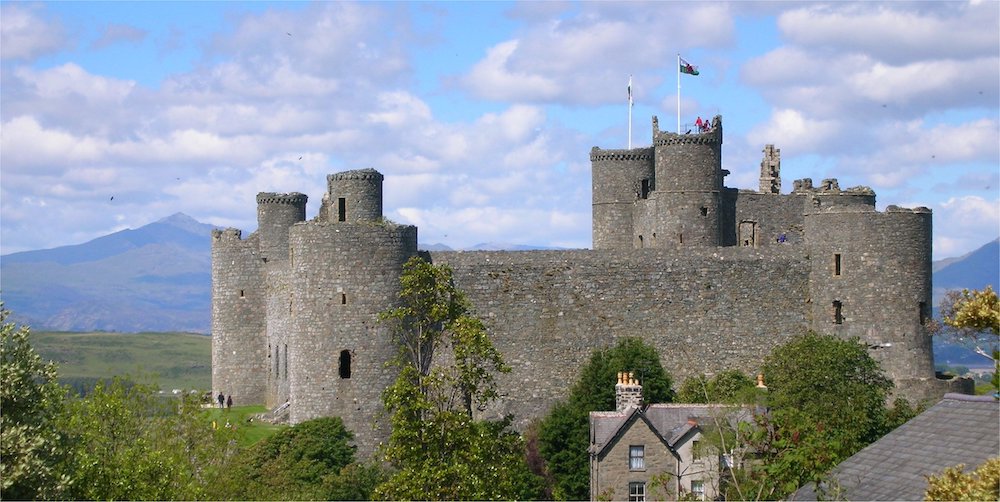 With the crashing waves of the Irish Sea on one side and the jagged peaks of Snowdonia on the other, Harlech Castle towers up from its rocky perch. Known as one of the most formidable fortresses in King Edward I’s ‘Iron Ring’ – a strategic circle of castles, built to contain the defiant Welsh and stifle any attacks or rebellions – Harlech Castle took just 12 years to be built, by 100’s of skilled craftsmen.

The stronghold was built as a concentric castle – meaning that the structure had two or more curtain walls, with the inner wall being higher than the outer so it could be defended from. The castle was wrested from the English by Owain Glyndwr’s (the last Welsh national to hold the title Prince of Wales) forces during the Welsh rebellion, however, the monarchy took it back in 1408. The next battle Harlech Castle saw was the infamous War of the Roses (upon which the popular series Game of Thrones is based), during which it was the last castle to hold out for the Lancastrian side.

Considering a trip to Harlech Castle? Here are the best towns to stay in Snowdonia. 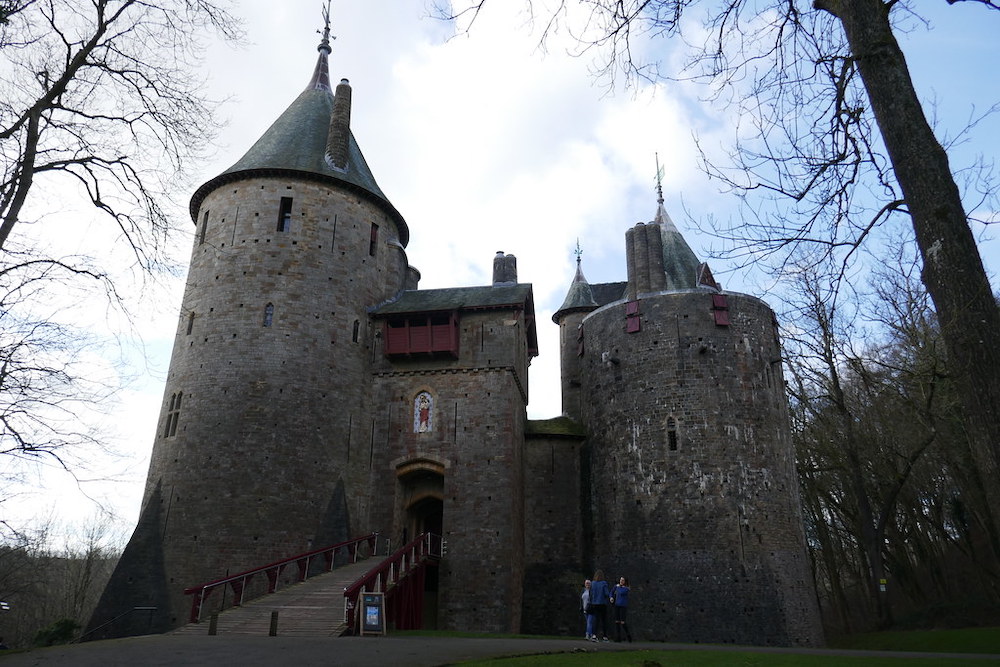 An infant by Welsh castle standards, the Castell Coch we can see today was designed by the architect William Burges, one of the greatest Victorian art-architects. Commissioned by the castle owner, the third Marquess of Bute (who was coincidently the richest man in England at the time) Burges allowed his imagination to run wild on this project, creating a fairytale masterpiece.

Although the outside is only a couple of hundred years old, Castell Coch (meaning Red Castle) actually rests on ancient foundations: beneath the castle lies the remains of a 13th-century stronghold, originally built by the Normans and then used as a hunting lodge by ‘The Red Earl’, Lord Gilbert de Clare.

Although the castle is not a ‘traditional’ mediaeval castle, it remains a firm favourite with the Welsh public and tourists alike. Perhaps because it is an exuberant expression of an extremely talented imagination when left to run riot with infinite budget and scope.

Best for: A dramatic skyline silhouette

Voted the most romantic ruin in Wales by Countryfile magazine, Carreg Cennen was also a firm favourite with the artist Turner and appears in many of his sketches. And for good reason too: clinging to a giant limestone crag some 3000 feet above the winding River Cennen, the mysterious silhouette of the castle can be seen for miles around. Once you’ve climbed up to it, the views from the battlements are spectacular, stretching across the pretty Carmarthenshire countryside.

Although the ruins which can now be seen on the hill hail from the 13th century, there is archaeological evidence that the craggy hilltop has been inhabited since Roman, and possibly prehistoric, times. Unusually, as its presence would actually weaken the structural integrity and defensibility of the stronghold, there is a secret cave which can be found deep in the bowels of the castle. Carreg Cennen is actually one of the only castles in Britain to have such an intriguing natural phenomenon and the reason why the castle was built by a cave in the first place is still debated today.

The castle is privately owned and shares the space with a working farm. Expect to see their herd of Longhorn Cattle grazing peacefully on the hills by the castle – an element which adds to the romantic atmosphere. If you’re feeling peckish after your visit then you can enjoy one of the homemade afternoon teas, while sitting in the beautifully-renovated oak-timbered barn.

See the best holiday cottages in the Brecon Beacons.

Best for: A regal feel 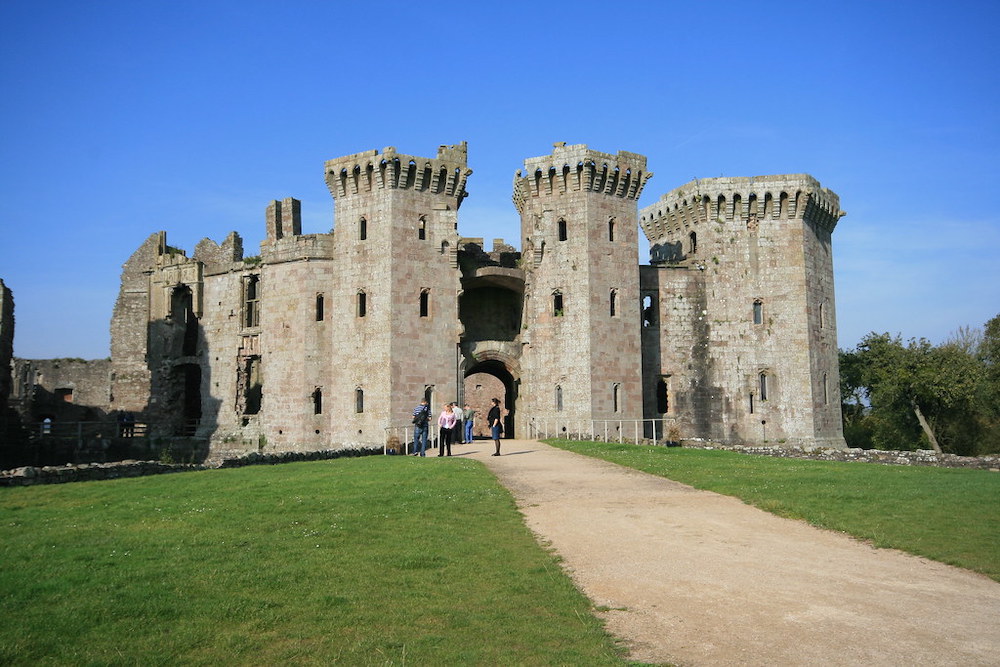 Featured on an episode of the BBC series Merlin, with numerous towers and crenellated turrets and Tudor-styling Raglan Castle is unlike any other castle in Wales. Said to be one of the last ‘true castles’ built in the country, its construction was started in the 1430s and completed nearly 100 years later in 1525.

This handsome castle is one of the grandest in Wales – its state of partial ruin simply adding to its charm. As you cross the moat and approach the towering gatehouse, keep a lookout for the gargoyles lurking in the top corners of the towers. Make sure to ascend the dizzying spiral staircase up to the top of the Great Tower, where you will be rewarded with unbroken panoramic views across the beautiful local countryside.

Whilst Raglan Castle is dog-friendly, dogs must be kept on a lead at all times during your visit. It’s also worth noting that dogs are not allowed in the Raglan Castle Cafe, which is just down the road from the castle.

Planning a trip with the pooch? Check out our great selection of pet-friendly holiday cottages in Wales.

Best for: A mighty medieval fortress 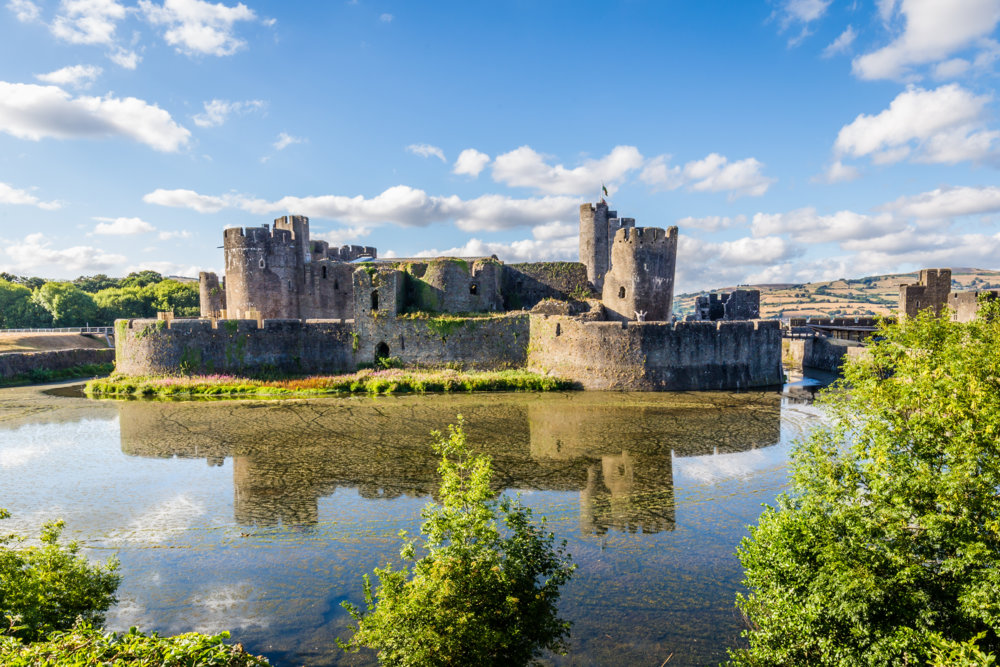 The sheer scale of Caerphilly Castle in South Wales is truly something to behold! It is the largest castle in Wales and the second largest in Britain (being beaten only by Windsor Castle). Understandably the sprawling magnitude of its castle has helped put the surrounding town of Caerphilly on the map, alongside the cheese of the same name.

As well as size, the castle also boasts Wale’s very own answer to the Leaning Tower of Pisa. During the Civil War, the south-east tower was attacked with gunpowder and left veering off on a, somewhat precarious, angle. Fast-forward 400 years and the tower still hasn’t been straightened – an unusual quirk which visitors delight in seeing.

As well as the wonky tower, the vast moat and scattering of islands surrounding the castle make it a photographer’s absolute dream. Caerphilly Castle is known as one of the great mediaeval castles of West Europe, and is definitely worth a visit if you’re in the local area. 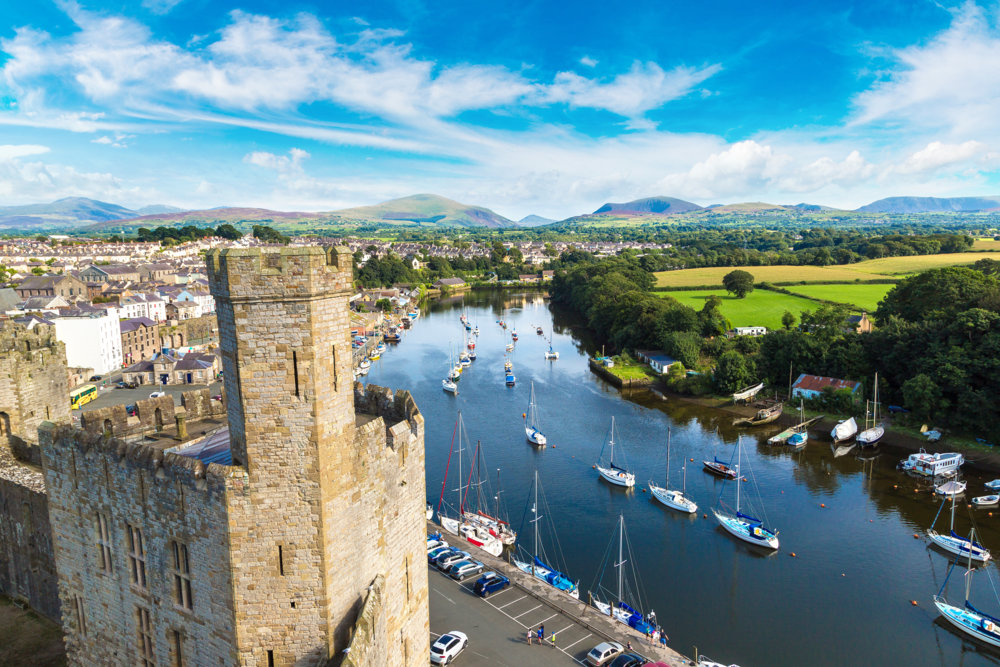 Caernarfon Castle (or Carnarvon Castle as you might see it written) on the banks of the River Seiont, is the second most popular castle in Wales, with over 210,000 visitors a year!

Unashamedly formidable, the castle was built by Edward I in response to his ongoing struggles with rebellious members of the Welsh nobility. The gigantic structure took 47 years to build and cost the princely sum of £25,000. The result: one of Wales’ most impressive castles, with intimidating towers, impregnable walls and a daunting King’s Gate. Along with Harlech Castle, Conwy Castle and Beaumaris Castle, this monument has been part of the Castles and Town Walls of Edward 1 World Heritage Site since 1986. 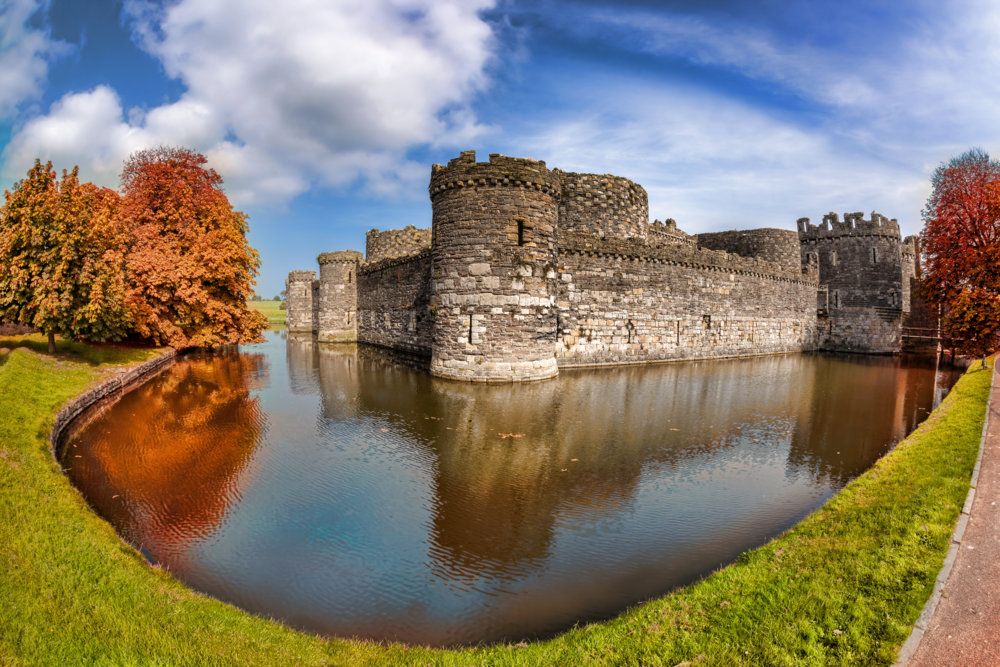 Set on the pretty island of Anglesey, Beaumaris castle was built by Edward I and is considered to be ‘perfect’ in castle terms, with its classic proportions and concentric design. In fact, in architectural terms, it is reputed to be the most technically perfect castle in the whole of Britain and has few rivals in the rest of Europe. Constructed as the last part of his ‘Iron Ring’ strategy, the money and supplies actually ran out before Beaumaris could be completed and the castle remains an unfinished masterpiece to this day. The castle is one of Wales’ three world heritage sites.

The medieval town of Beaumaris, which sprung up around the castle over the centuries, is well worth exploring too. With a fascinating mixture of medieval, Georgian, Victorian and Edwardian architecture, an atmospheric Victorian gaol and plenty of seaside restaurants selling fresh fish dishes, it’s a great place to spend a relaxing afternoon once you’ve explored the castle. Big fans of medieval history will want to plan their visit to coincide with the annual medieval festival held at the castle, which features jousting, jesters and traditional music. 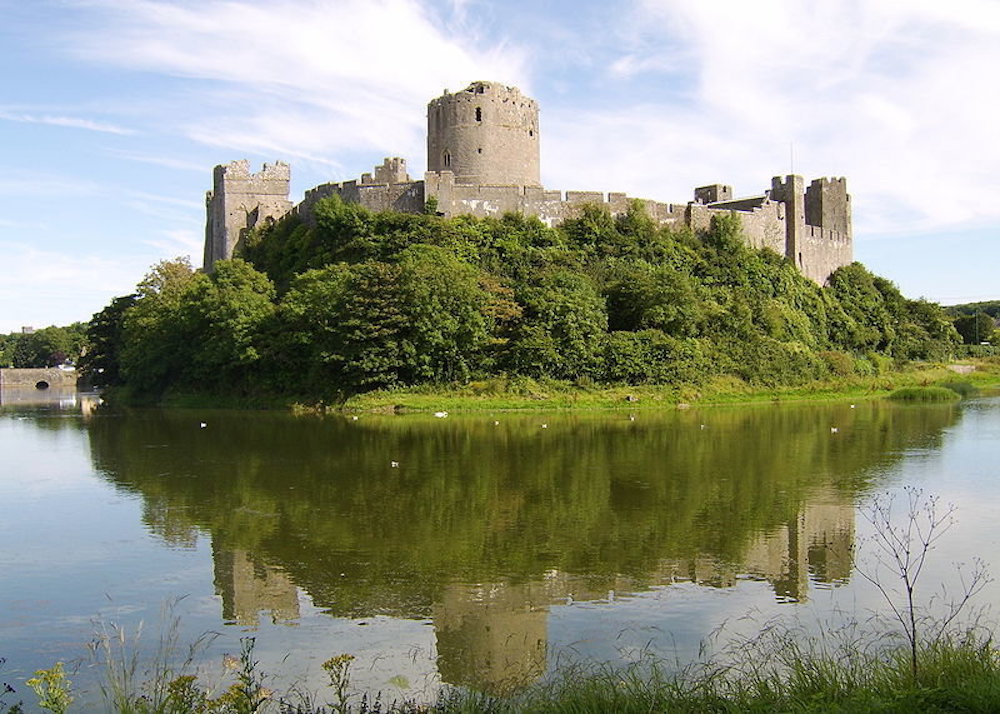 Famously known as the birthplace of Henry VII, the founder of the Tudor dynasty and Britain’s only Welsh king, Pembroke Castle is a gigantic oval-shaped castle, partially surrounded by a large millpond.

Like Carreg Cennen, Pembroke Castle is built above a vast cavern (called The Wogan), which has been used by humans for the last 12,000 years at least. During medieval times, the cavern was used as a storeroom and maybe even a boathouse, as it was easily accessible by boat.

If you happen to visit the castle in the late afternoon, then it’s worth taking a walk along the footpath running around the millpond once you’re done inside the castle itself. This lovely evening stroll will reward you with great views of the castle, especially when its bathed in golden hues from the gorgeous pre-dusk glow. 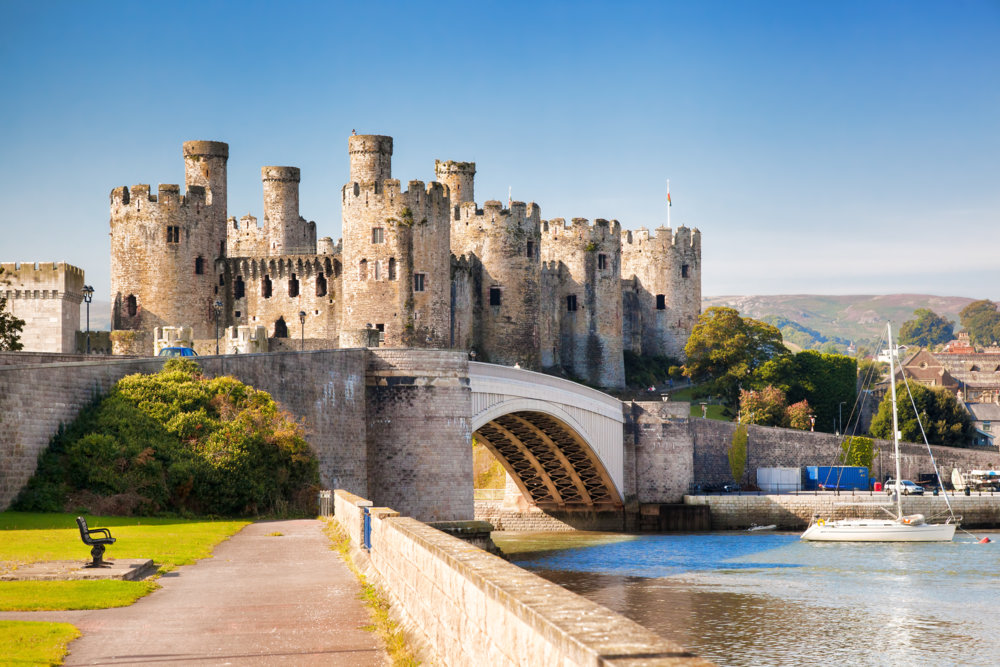 Another castle built by Edward I on the north coast of Wales, Conwy Castle is amongst the finest surviving medieval fortresses in Europe. It features two barbicans, eight huge towers, a high curtain wall and an impressive base of rock to fend off attacks from below.

This is actually currently the most visited castle in the whole of Wales and, with just one glance at its lofty towers, menacing walls, formidable structure and dark brooding presence, you can certainly see why. The whole structure perfectly encapsulates the dark, brooding presence of a medieval castle, and, as you wander along the walls, you can almost hear the clash of swords and battle cries from times long past.

Due to the restoration of the spiral staircases in its great towers, you can now walk a complete circuit around the battlements of the castle. Along the route, you can observe the harbour and bustling streets of the town of Conwy, set against the backdrop of Snowdonia’s rugged mountains.

Like the sound of a castle-filled getaway? Discover the 10 of the best UK castles.

Nine best lakes in the UK