Devon attractions: The best things to do

Filled with stunning sandy beaches, fossil-studded cliffs and pretty seaside towns, the sun-kissed county of Devon is the perfect spot for a relaxing staycation. As well as beautiful scenery, you’ll find plenty of fun things to do throughout your visit too. With a variety of art galleries, National Trust properties and tourist attractions scattered throughout the area, there’ll never be a dull moment. From pristine beaches to family fun-filled adventure parks, here are Devon’s top attractions. 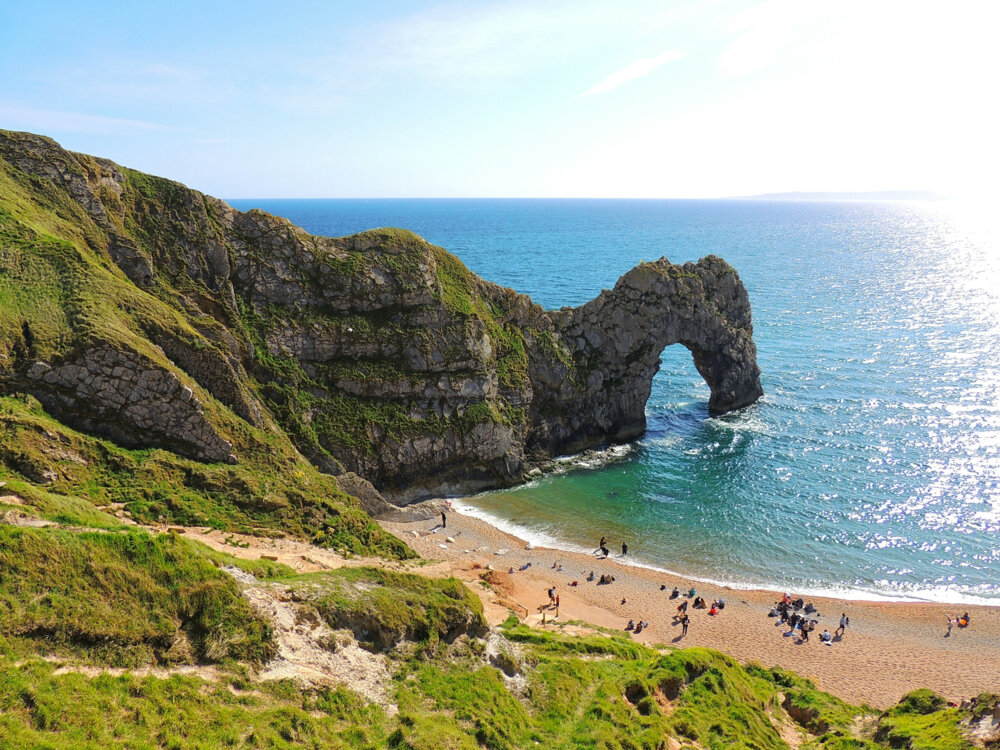 One of the UK’s most iconic sights, Durdle Door is a magnificent geological wonder. Located in Wareham, this incredible limestone arch can be found along the Jurassic Coast, towering out of the aquamarine water at 200 feet high. Within the World Heritage Site, the arch is also part of the Lulworth Estate and a short walk from Lulworth Cove.

A sweeping expanse of secluded cove leads to Durdle Door, which is perfect for picnicking and relaxation. In the summer months, the inviting water attracts swimmers and snorkelers, surrounded by the awe-inspiring scenery.  Just be aware there may be no lifeguard on this beach. 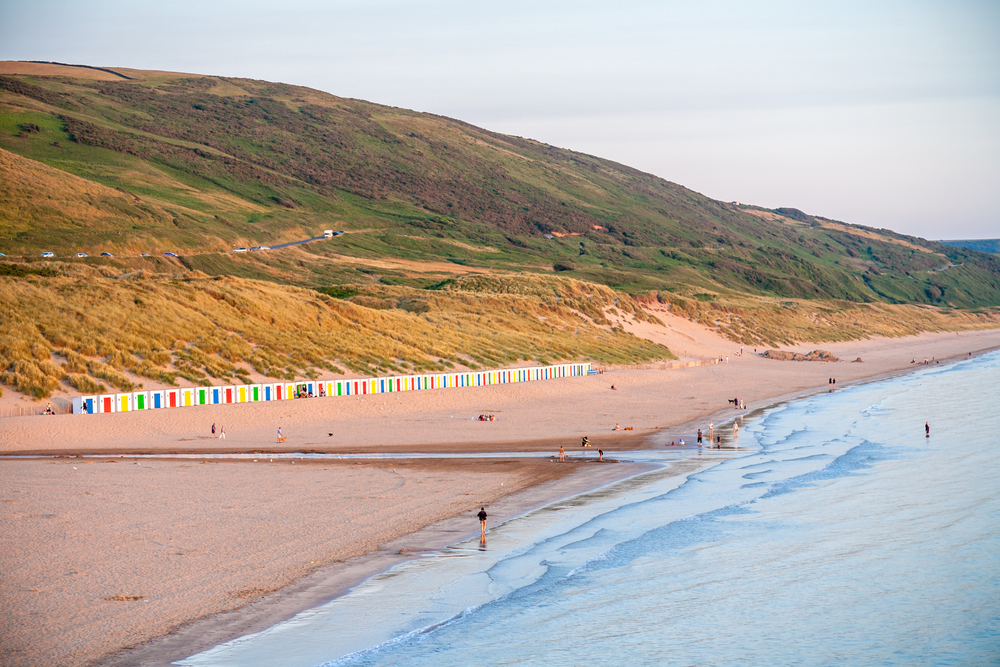 Woolacombe Beach is a three-mile stretch of beautiful golden sand. It receives some of the best Atlantic breakers in this part of the world, attracting surfers from far and wide. Although it is a family favourite during the summer, its vastness means that it rarely feels overcrowded.

This award-winning beach is situated in an Area of Outstanding Natural Beauty.  Surf lessons take place on the beach and provide fun for all the family. The bustling seaside resort of Woolacombe village provides facilities for tourists.

Best for: Entertaining all the family.

Feel like a giant for the day! Set in the town of Torquay in South Devon, the award-winning Babbacombe Model Village is the perfect day out for all the family.  Explore four acres of model scenes, depicting miniature villages, railways and people. Adults will love the humorous references to British life, while the kids will be transfixed by the tiny little characters and their lives.

Best for: A fun-filled family day out.

Treat the kids to a day out at the biggest family theme park in Exeter. Home to over 60 rides and family attractions, as well as live entertainment and animals, Crealy Theme Park Resort promises to keep even the most fidgety members of the group entertained.

Best for: An educational afternoon out.

Set off on a journey through time at Torquay Museum. Home to northwest Europe’s oldest human fossil, an Egyptian mummy and an entire gallery dedicated to the famous crime writer Agatha Christie, the museum caters to a variety of interests. What’s more, the exhibitions here are interactive and imaginative, meaning the kids won’t get bored.

Best for: Shopaholics and a spot of local culture.

Surrounded by acres of beautiful Devonshire countryside, this historic market town is well worth spending an afternoon exploring. With a number of markets held throughout the week, you’ll find some great local produce here at Newton Abbot. What’s more, there are plenty of pretty parks within walking distance of the town centre – ideal for an afternoon picnic.

The South West is renowned for its arts and crafts culture, with plenty of artists having been inspired by the beautiful local landscapes over the years. Set in the bustling seaside town of Dartmouth, on the River Dart, the Dart Gallery is renowned for showcasing an array of contemporary British art.

Spread over two floors of an elegant 19th-century building, this is a great spot to spend a rainy afternoon, especially if you have any art lovers in the group.

Best for: Incredible views of the coast.

Set in North Devon, Lynton and Lynmouth are two historic towns whose economic and tourist development were being significantly hampered by the 500ft cliffs which separated them in the 19th century. Over 125 years old, this funicular solved that problem and once built became the steepest in the world.

The Cliff Railway is entirely water-powered with the two cars permanently attached to each other by hauling cables. It takes 700 gallons of water to operate the cars which weigh 20 tonnes combined when fully loaded. This unique mode of transportation makes for a very exciting way to travel.

Erected on the most southerly headland in the county, Start Point Lighthouse has jagged and rocky surroundings and strong, hazardous waters. This led to countless shipping disasters, wrecks and loss of life until the lighthouse first shone its warning light in 1836.

Open to the public and with guided tours at specific times of the year, Start Point in Kingsbridge overlooks the busiest shipping lanes in the world. The rugged coastline surrounding the lighthouse offers scenic walks with far-reaching panoramic views.

Situated in the picture-perfect fishing village of Beer, this sweeping shingle beach is enveloped by vertiginous limestone cliffs.  Believed to have once been a preferred location for smugglers, fisherman today regularly launch their boats from the shore.

The area is famous for its mackerel and fisherman can be watched bringing in their daily catch from this Jurassic Coast beach.  Coastal walks are popular in this region with far-reaching views over the water being part of their appeal and reputation. Beer is on the edge of The South West Coast Path.

Best for: A beautiful photo opportunity 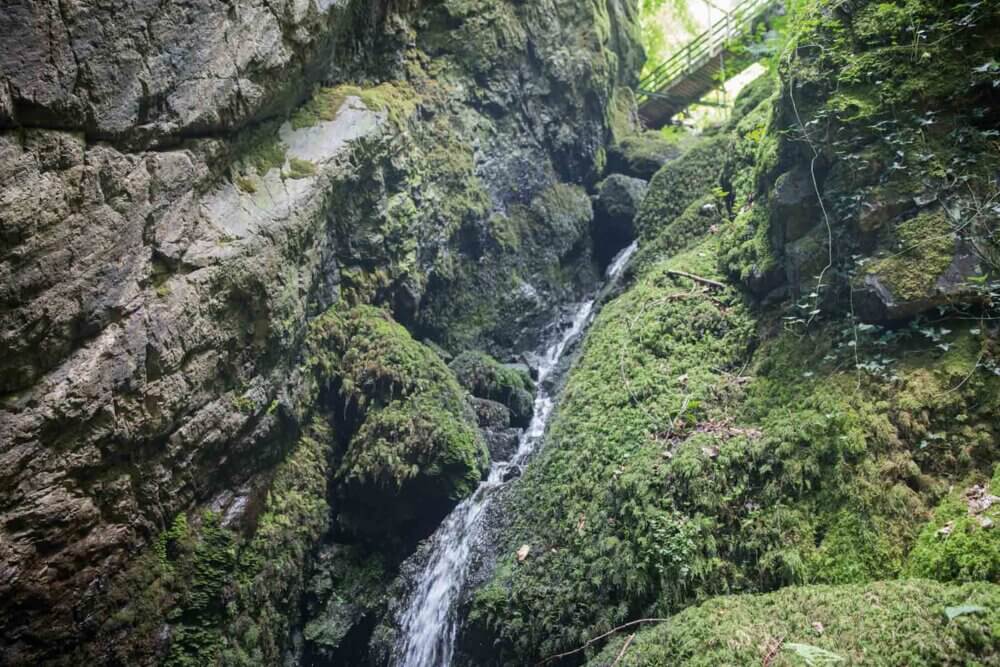 Canonteign Falls is the home of some of England’s most spectacular waterfalls. Both the natural falls created over the centuries in this valley and the picturesque falls named after the Third Lady Exmouth and built under her direction in 1890. The falls provide inspiration for many photographers and painters due to their striking beauty.

Canonteign’s Lady Exmouth Falls were created by local miners in Chudleigh after they had been made redundant following the closure of the estate’s silver mines.  The impressive waterfalls are the highest man-made waterfalls in England, measuring 70m high. 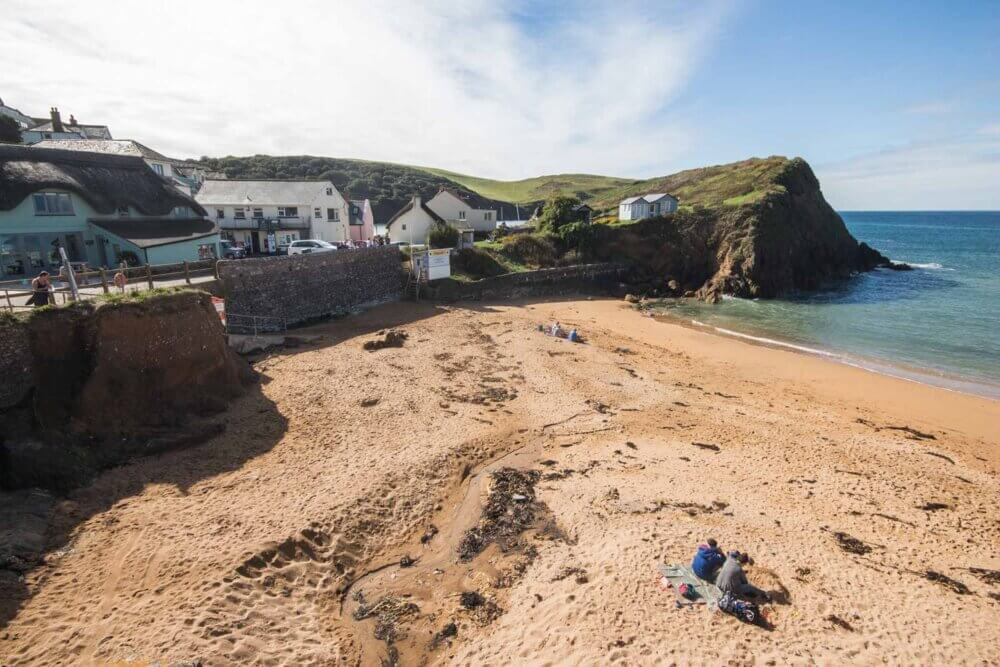 Hope Cove is situated in South Devon’s AONB and is a small seaside village close to Salcombe. With two beautiful beaches sheltered by the headland of Bolt Tail, in the curve of Bigbury Bay, the village is famous for its crab and lobster.

Along with its charming thatched cottages and clean sandy beaches, the area is also known for its unique flora and fauna and surrounding miles of rugged Heritage Coastline, including the nature reserve of Slapton Ley.

Best for: Relaxing by the seaside. 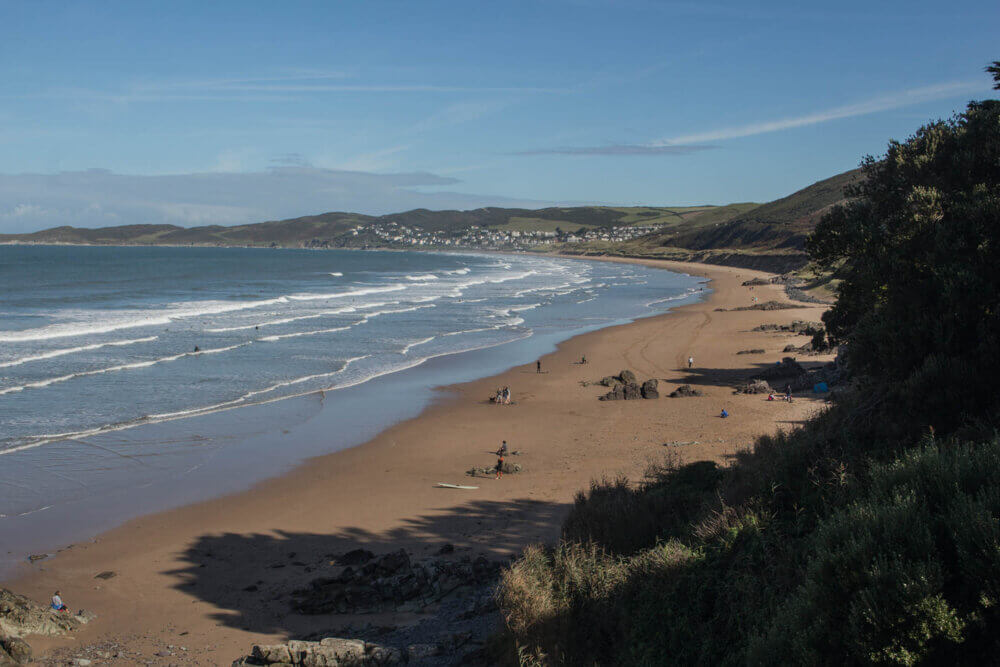 Putsborough Sands is a sweeping, golden sand beach, lapped by the Atlantic, which forms the southern section of Woolacombe Sands.  Close to the Baggy Point headland which provides the beach with a little shelter, the waters are popular with surfers, particularly longboarders. You can reach the beach from the village of Georgeham.

Its clean waters, impressive surroundings and limited facilities appeal to those seeking a quieter and more rustic beach experience.  Rock pooling and watersports are popular activities on Putsborough Beach. Dog walking is permitted at certain times of the year.

Best for: A trip on a traditional steam train. 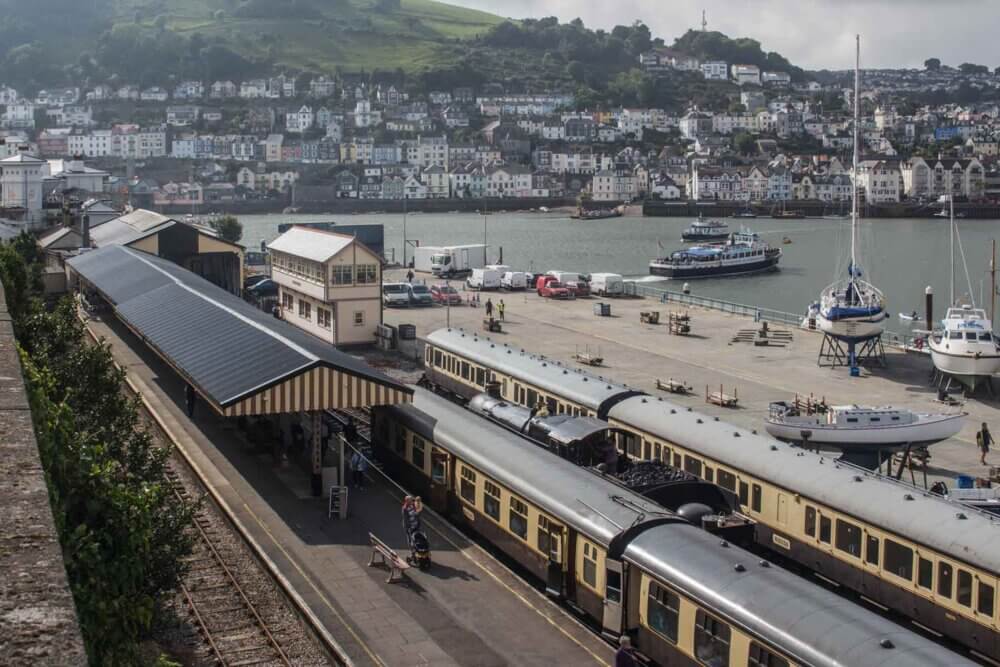 Kingswear is the last stop on the Dartmouth Steam Railway which makes a delightful way to arrive on the east bank of the River Dart. Hop off the railway and onto the frequent passenger ferry and, a few minutes later, you are in the heart of Dartmouth.

The village itself is home to several 19th-century villas and a number of brightly coloured houses that look splendid when the sun shines. This charming and attractive village provides spectacular views of the sea and up the river to Totnes and a welcome break from the hustle and bustle of across the river.

Best for: Discovering the history of Devon.

Discover Dartmouth’s incredible history by visiting Dartmouth Castle. This scenic stronghold is situated on the water’s edge of the river Dart. It’s within walking distance of the town, so have a stroll along the riverfront and take in the wonderful views. The castle was once used to guard the entrance to the narrow Estuary, with its history dating back over 600 years.

Inside the castle, you’ll find displays of historic artillery, giving you an insight into how the castle once operated. If you don’t mind heights, climb up the gun-tower for incredible views over the river. Once you’re back in town, you’ll find plenty of options for a tasty lunch.

Best for: Keeping yourself busy for the whole day!

The Royal Albert Memorial Museum in Exeter has an impressive display of over 1 million objects, from zoology, anthropology, fine art and local archaeology. With so much to see, you’ll easily spend the whole day wandering around this huge museum.2

The museum has undergone huge redevelopments over the years, to keep up with its ever-expanding collection. Since its reopening in 2011, it has received several prestigious awards and even earned the title of ‘Museum of the Year’ in 2012.

Best for: Taking a picnic and relaxing in the gardens. 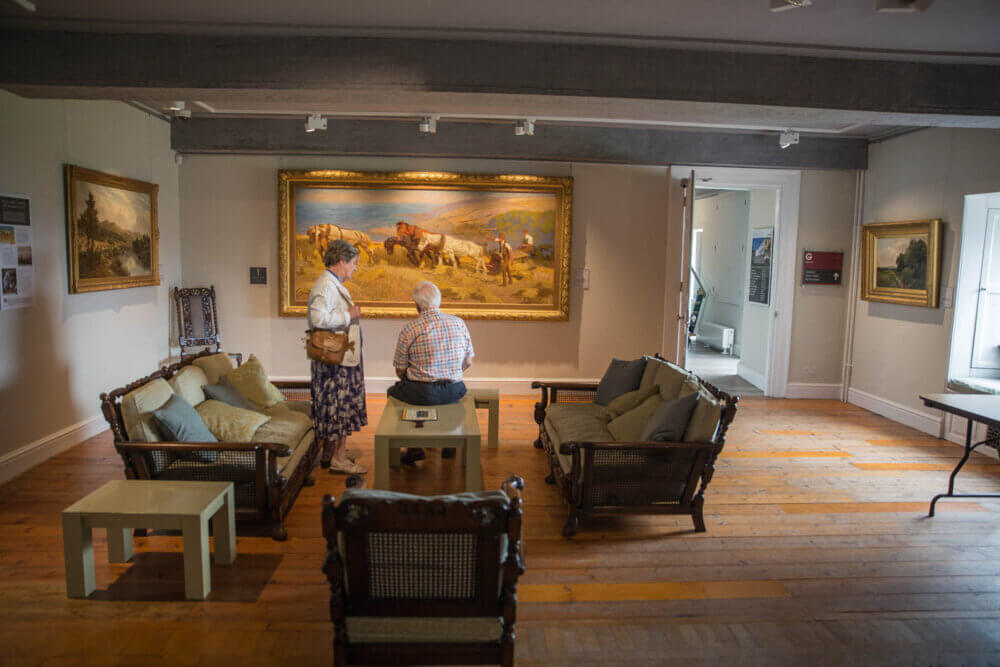 Dating all the way back to 1196, Torre Abbey is a historic building and museum located in Torquay. It’s considered one of the best preserved medieval monasteries on the South West coast and is home to a collection of art exhibitions from a range of talented artists.

It’s also known for its tranquil walled gardens, which house a beautiful collection of exotic plants. Pack a picnic or bring your walking boots for a peaceful stroll along the gardens. There’s also a tea room at the abbey, serving up coffees and a mouthwatering selection of cakes and light meals.

14 things to do in Devon when it rains